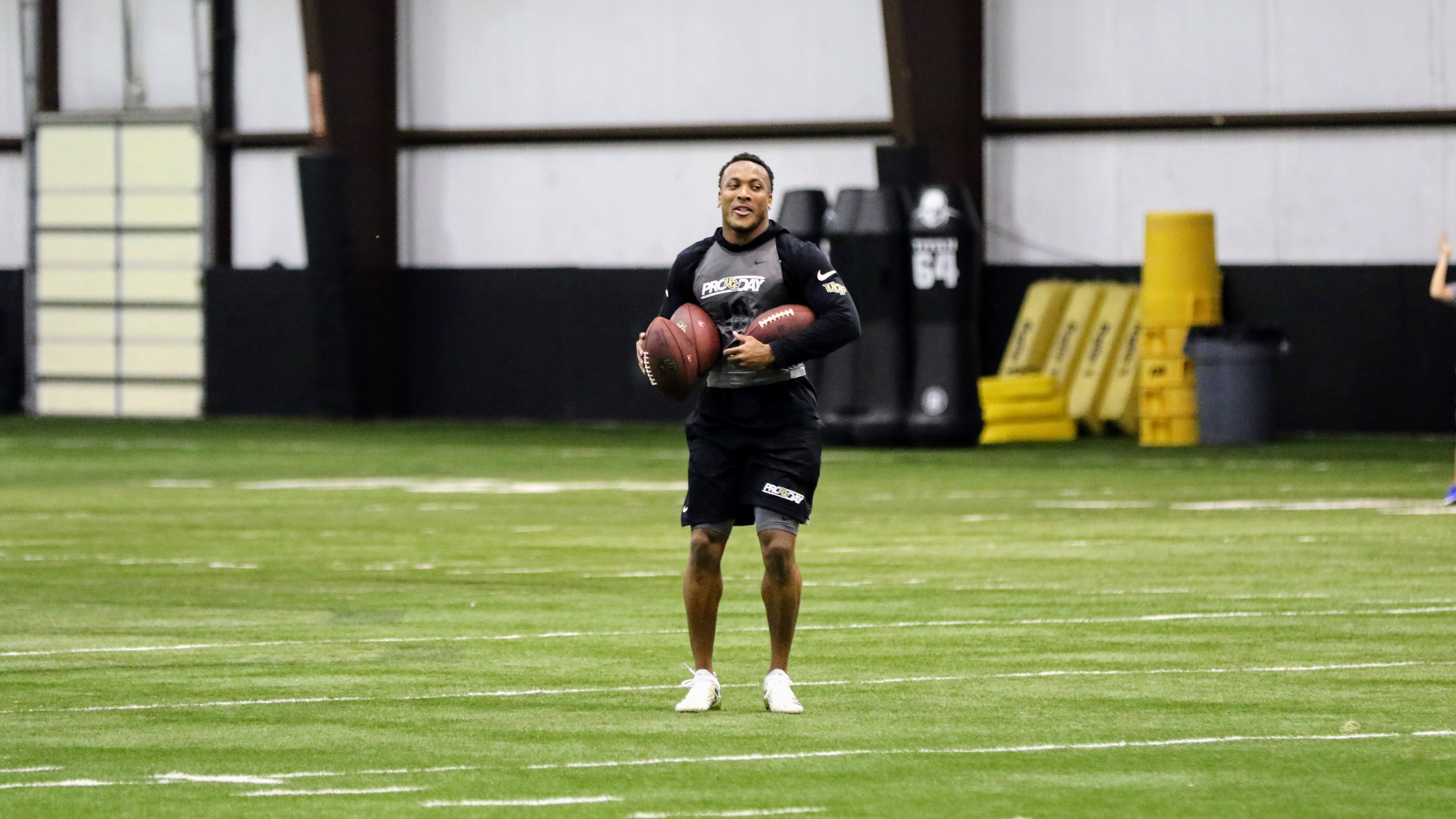 31 of the 32 NFL teams were represented by scouts on campus Thursday afternoon for UCF Pro Day. With over 60 scouts total from the NFL and 70-plus credentialed media in attendance, all eyes were on Shaquem Griffin, Mike Hughes, Tre’Quan Smith and Jordan Akins. In addition, other UCF athletes like Aaron Evans and Tony Guerad looked to make an impression in hopes of hearing their name called during next month’s NFL Draft in Arlington, Texas. Here’s a notebook of observations and other news from the day:

Another solid workout for Shaquem Griffin:
After stealing the show at the NFL Combine in Indianapolis last month, linebacker Shaquem Griffin impressed NFL scouts again at UCF Pro Day. After not performing defensive back drills at the Combine due to cramping, Griffin was able to run through drills, caught passes and looked good overall. Although he didn’t run a 40-yard dash today, his impressive time of 4.38 at the Combine speaks for itself. Shaquem said after the drills that he was invited to the NFL Draft and plans on attending. Griffin also jumped 37.5 in the vertical.

As for teams interested in Griffin, ESPN’s Josina Anderson reported that Shaquem met with Saints defensive coordinator Dennis Allen and also met with the Tennessee Titans last Sunday. Shaquem told the media while meeting with Seattle Seahawks coach Pete Carroll, he told him that he wants to join his twin brother Shaquill Griffin “very, very badly”. He added that he met with the Jacksonville at the Combine. Additionally, Griffin said most teams have talked to him about playing linebacker, specifically the weakside linebacker.

Mike Hughes continues to impress:
The cornerback showed off his skill set and looked impressive doing his thing. He stood on his Combine numbers and like Shaquem didn’t run. Hughes ran defensive drills and fielded punts, looking really fluid with quick lateral movement. This performance certainly secured him as a first round or early second-round draft pick.

Hughes met with the Saints and Carolina Panthers yesterday and will meet with the Panthers a second time for a pre-draft visit. In addition, Hughes will meet with the Chicago Bears, Philadelphia Eagles, Minnesota Vikings, Green Bay Packers, Tampa Bay Bucs and Kansas City Chiefs, according to Tony Pauline of Draft Analyst.

Jordan and Jordan:
The two UCF tight ends, Jordan Akins and Jordan Franks had a good day catching passes and running drills. Akins showed a 35’’ Vertical Jump and jumped 122.4’’ in the Broad Jump. The former Major League Baseball player is hoping to get drafted in the NFL and said after Pro Day that the NFL draft process is “a lot more fun” compared to the MLB’s. Akins jumped on a plane to go and meet with the Kansas City Chiefs and said he’s already worked with the Saints and Los Angeles Chargers. In addition, Akins worked out with the Detroit Lions. After not being able to perform any drills at the combine, Akins performed well and looked good catching balls.

As for Franks, he ran a 4.60 in the 40-yard dash and 11.77 in the 60-yard shuttle. Entering the combine, Franks wasn’t the main tight end competing with Akins but made an impression on NFL scouts and had a good day. He made a few good plays throughout the catching drills.

Tre’Quan Smith did his thing:
The wide receiver looked good on his cuts and continued to do his “thing” dropping only one pass in the catching drill. According to Smith, someone told him that he needed to prove he was a “hands catcher”. He certainly did just that during his workouts. Tre’Quan had a fantastic combine last month and improved at UCF Pro Day. Smith has already had private workouts with the Lions and the Tampa Bay Bucs.

Offensive lineman Aaron Evans told me he is working out for the Chiefs and the Chargers next month for an official 30 visit. Evans, who missed the Peach Bowl due to back surgery, said it took about a month to “get back to normal” but says he “feels great now”. Evans looked bigger and mentioned he’s been training six days a week for the past three months. Evans completed 27 reps on the bench and hit 25’’ on the Vertical Jump.

Defensive lineman Jamiyus Pittman told the media that he’s talked to the Denver Broncos, Bucs and Titans. According to the Orlando Sentinel’s Shannon Green, Pittman has another meeting lined up with the Bucs on April 13th. The lineman completed 25 reps on the bench and overall had a solid Pro Day.