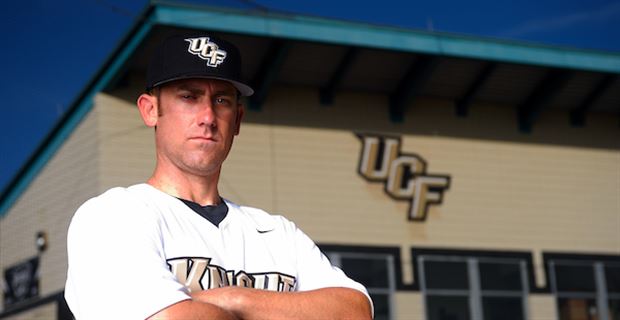 While the Knights have yet to play a game under their new skipper, Coach Lovelady’s impact on the team has already shaped many of the players on the roster.

“He’s real into the process and making sure that we follow the process and stay on it and not think about the bat before or the pitch before and just staying focused,” said senior pitcher Robby Howell. “That’s been the most important thing for us, to just go pitch for pitch, not worrying about what happened before.”

Under Lovelady’s leadership, the team feels like for the first time in awhile they are having fun again, which is a feeling the players lacked over the last couple of seasons when former skipper Terry Rooney was coach.

Part of the fun for the players has been seeing Lovelady join in during some of the team’s practices.

“He’s (Lovelady) more about everyone being an individual and, you know, being yourself,” said Howell. “We’re all able to go outside our comfort zone a little bit more because he’s a fun guy and he brings it out of us, he’s a kid just like us.”

One of the popular examples amongst the players of Lovelady having fun is that he goes out on the field and sits with no shoes on. According to Howell, it’s easier for the team to be themselves thanks to Lovelady.

“You’ll see him on the field, you know, sitting criss-cross, acting just like us, and it’s a lot easier to be yourself when your coach allows you to be yourself,” said Howell. “It’s just a lot of fun being around him and this whole coaching staff.”

Even though Lovelady likes to have fun, he knows when to be serious and win big games. Reaching Omaha and winning a national championship is the main goal for every program heading into Friday’s openers, and when it comes to winning baseball, Lovelady has plenty of experience.

“He’s been there before, he knows what it takes to get to Omaha,” said Hamblin. “That’s everyone’s dream when you come to UCF is to go Omaha, play a division one level and make a regional first. One step at a time, conference, regional, super regional, then the ultimate goal is Omaha. To have a guy that’s been there and has done that and knows what it takes, it’s a huge factor going into it,” said Hamblin.

One of the the biggest changes for the Knights during preseason was nutrition.

Having the players on the right nutrition plan was a main point for Lovelady and his staff heading into his first season at UCF. Friday’s starter, Howell, admitted that he lost nearly 35 pounds thanks to the changes in his diet and workouts.

Howell is looking to improve on his stellar 2016 campaign, where he led the American Athletic Conference with a 1.96 ERA.

“I personally wanted to get in better shape, so I really worked hard in the weightroom and tried  to get my velocity back to where it was before last season,” said UCF’s ace. “Just really wanted to be able to do it over again this year so that’s really what I’ve focused on.”

Howell isn’t the only player that benefited from the new nutrition plan. Saturday’s starter, Juan Pimentel, believes this change in diet and exercise helped him and the entire team.

“When the coaches first got here, the first thing they hit on was nutrition,” said the senior right hander. “People started buying in and our nutrition changed. The velo went up, endurance is going up, strength is going up, we’re going to be able to hold up a lot more this season and just play up more at the end of the season more than the beginning.”

UCF brought in 12 new bodies to help turn things around this season. Among the newcomers, nine are junior college transfers including Jordan Scheftz, a junior from Saddleback College in California.

While coach at Wright State, Lovelady was recruiting Scheftz to Wright State, but Scheftz wasn’t sure he wanted to play there. Once UCF hired Lovelady, Scheftz was on board to come to Orlando.

“We recruited him really heavily at Wright State, I thought he was going to come to Wright State,” said Lovelady. “In the end he couldn’t pull the trigger. I kind of forgotten about him for maybe three or four weeks. When I talked with Ryan [Klosterman] I asked what do we have left, he told me we have   a scholarship spot, we’ve been looking for a pitcher. There was a pitcher that they were hot on and I asked who it was and it happened to be the same guy. We called him and he committed on the spot.”

Scheftz is expected to be one of the late-inning relievers in addition to lefty Bryce Tucker. Last season, UCF lost 11 games decided by just one run, something the Knights know they need to change.

“I’ve never seen any of these guys compete in a real game so it’s hard,” said Lovelady. “I think anytime you’re in those situations, or anytime the lights go on, some people go up and some people go down. I’ve got to figure that out, so these first couple weeks I think there’s going to be a lot of maneuverability in the bullpen and the starting lineup.”

The Knights open the regular season against Siena, a team they know very well. UCF has won their last nine home openers and seeks to continue that trend this year.

“We’re definitely sick of playing in intrasquad and doing that kind of stuff so we’re excited to see someone else in the opposing dugout in another uniform,” said Lovelady. “Excited to see what this is all about, what the atmosphere is going to be like and what the fans in the community are going to be like. It’s an exciting time.”

Last season the Knights finished (26-33) and entering this season tied with Memphis for seventh in the preseason poll according to the AAC Coaches Poll. However, many of the players believe this team is one not to be overlooked.

“Definitely makes you think a lot but we’re not worried about [preseason rankings],” said Pimentel. “That really doesn’t mean a lot. There’s a lot of other things that have come out the last week, that truly doesn’t really matter. We haven’t played a game yet so what do they know.”
UCF’s ‘Opening Knight’ is set for 6:30 p.m. Friday. The Knights then wrap up the weekend series at 6:30 p.m. on Saturday and 1:00 p.m. on Sunday. Friday’s opener is free for all fans.

This entry was posted in UCF Baseball, UCF Sports.
BeedeFoto.com