Tacko Fall: “I definitely want to make the NCAA Tournament” 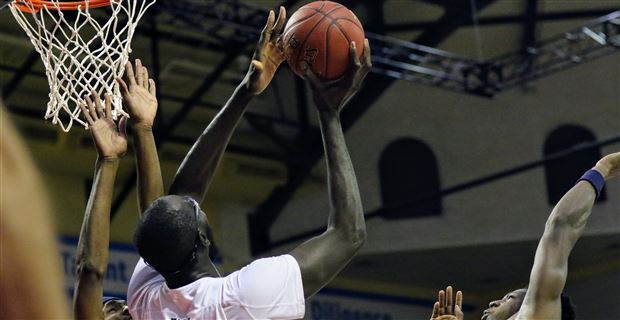 Tacko Fall made his goal for his senior year clear: make the NCAA Tournament.

After missing the final 14 games of his junior season due to shoulder surgery, the UCF center announced on Wednesday he will be returning for his final year of eligibility. On Friday, Fall spoke to the media about his recovery process and his decision to come back to UCF.

“It was a long process of just thinking. My season ended pretty early and I didn’t like the way it  ended,” Fall said who’s season ended officially in January, “BJ (Taylor) got hurt, Aubrey (Dawkins) didn’t play with us, AJ (Davis) got hurt, he didn’t play a couple games, there were a lot of injuries, I just felt like we didn’t do as good as we could have done because of that. I kind of felt like I still had things to take care of before I leave school. UCF has meant a lot to me. Even before I got here, I felt like I had to do something big before I left. The way last season ended, I didn’t really like it,” said Fall.

This time last year, after his sophomore season, Tacko declared for the NBA Draft but did not sign with an agent, allowing him to return for his junior year. A year later, the 7-foot 6 center felt it wasn’t necessary to declare again since he had “all the feedback” he “needed”.

“I probably would have gone through that and come back to school anyway, so why bother. I did that last year so I already had an idea of how it is and I really got all the feedback I needed. I already know all of the things I need to work on so, for now, all I gotta do is focus on school and get ready for next season,” said Fall.

As for recovery from his surgically-repaired torn labrum, Fall added that he should be working out soon and will be back to “100 percent” by July.

“I’m feeling great. I was telling Coach Taylor that I’m ready to go. I’m trying to practice but unfortunately, I can’t. I gotta go with what the doctors say so I gotta wait until they clear me to be able to work out. The rehab is going great, I’m just trusting the process right now,” Fall told the media.

Plagued by injury, Fall was forced to watch the Knights as they played the rest of the season without him on the court. According to Fall, this was “frustrating”, but described it as a learning experience.

“It was definitely frustrating but those are the types of things you can not control. I think that everything happens for a reason, I’m a firm believer of that. And how the season went, we didn’t like it but we just got to learn from that and keep moving forward,” said Fall.

Entering the 2017-18 season, the team had high hopes. Now, returning for one final shot at advancing to the NCAA Tournament, Tacko Fall feels that this team has the pieces to compete for a spot in the big dance.

According to the school, UCF returns over 75 percent of its scoring and rebounding last year. UCF looks to improve on its (19-13) season, one which ended in a second-round exit in the American Athletic Conference tournament.

“Personally, that’s the toughest group of guys that I’ve seen,” Fall said when asked about this past season, “Despite all the injuries we had, I think they did pretty good, close to 20-wins. With a lot of us getting hurt, a lot of us fighting through things, it just showed a lot of toughness and that says a lot.”

For now, Fall wants to forget about this past season and “move on” towards the next.

“It was very, very frustrating and it was also very frustrating to see everything we could have accomplished last year, but like I said, we gotta move on. Last year is gone, we gotta think about the future and get ready for what’s to come.”

Fall made it clear, he wants to leave his “mark at UCF” before his time in school is over.