Listen to my interviews with: 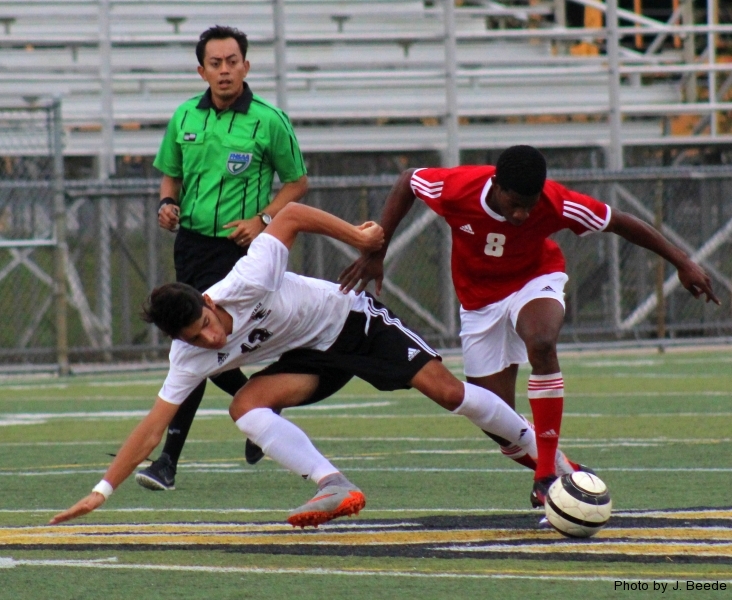 What was expected to be a very quick loss, turned into a huge upset as the Key West High School boys’ soccer team defeated the American Heritage (Plantation) Patriots 3-0. Despite the rain at the start of the game, the Conchs (9-3) were able to play a physical game and eventually pull an upset over a team that is ranked 104th in the nation.

“This was huge. We just beat American Heritage. I think that is probably the first time in Key West school history a soccer team has beaten them. I’m not sure, but ever since I have been in Key West, it has never happened. I graduated 11 years ago and all my four years in high school, that never happened,” said Key West head coach Marc Pierre.

The Conchs opened up the game strong immediately talking to each other on offense. In the 10th minute, Key West had an opportunity to score on a penalty kick. Junior Bidieu Noel broke free with the ball and a Heritage defender slide tackled him in the box and a foul was called. The Patriots’ goalie was able to stop the ball short on the PK attempt. Six minutes later, the Patriots would have a chance of their own to score. Key West keeper Christian Lee deflected the ball out of the box from a Heritage corner kick keeping it tied at zero.

Just two minutes later, junior Adam Swiecicki sent a shot towards the net, but the ball was deflected. Sophomore Drew Richardson was at the right place at the right time and with one touch gave Key West a 1-0 lead in the 18th minute.

After the water break, Noel led the Conchs to a two goal lead. With a pass from Alex Cabrera, Noel was able to turn inside of the defender and spin around giving him open space to shoot. With a booming shot top left from the junior, Key West took a hold of the game with a 2-0 lead over the Patriots in the 25th minute.

Noel wouldn’t be done. In the 37th minute, Bidieu found the back of the net for his second goal of the game. At the half, Key West led 3-0.

Junior Jacob Elomina would be put be in as goalie for the second half. In the 56th minute, the Patriots were given a free kick and nearly scored as the shot went wide. Key West’s backline was able to keep Heritage from scoring late. In the 70th minute, the Patriots had another free kick opportunity. The ball sailed over the defensive wall, but Elomina was able to dive and get a hand on the ball deflecting it away. Again and again, the Patriots attempted to get a shot on goal but were never able to score.

Although they did not score in the second half, the Conchs were able to stay strong on defense and travel back home with a 3-0 victory.

“It was a little disappointing for us. Key West certainly came and imposed their will upon us and they deserved the result tonight,” said American Heritage head coach Todd Goodman.

“They were really good, they had really good ball control and they were physical. We just controlled the midfield and our defense played a hell of a game. Our offensive players played really well,” said Key West coach Pierre.

This is Key West’s 9th win of the year. The Patriots are ranked 46th in the state of Florida according to MaxPreps statewide ranking, while Key West is 103rd. Expect that to change this weekend as new rankings will be released soon.

“I thought their determination, their drive, their willingness to succeed was the difference. They were first to most of the balls tonight and that was the big difference,” said Goodman.

“It was about who wanted it most tonight. And in my opinion, we wanted it more than them.  We put the pressure on them and all together, I love it. It was a great result and I am a happy man tonight,” said Pierre.

The Lady Conchs suffered their 7th loss of the season against American Heritage this evening. The Patriots had control of the game from the very start and never let up once. American Heritage came out on top 3-0. Despite the loss, head coach Scott Paul seemed pleased with the result.

“That was unquestionably the best we have ever played against an American Heritage team. Keeping it down to 3-0 is spectacular for the level of recruiting and the level of player talent that they have across the board which speaks volumes of where we are this year as a team,” said Paul.

In the second half, Alana Estenoz would go in as keeper for Emily Gardner. The Lady Conchs’ backline, led by senior Julia Passarelli, was able to keep the Patriots from scoring until the 52nd minute. The Patriots forward would shoot and the ball would be deflected by a Key West defender. Off of that deflection, Heritage would score its third goal of the game.

In the 56th minute, the Patriots would be rewarded a penalty kick and nearly score for the fourth time. Estenoz would make an incredible stop and keep the game at 3-0.

“Alana made a spectacular stop. The girl tried to get her to dive but the shot went straight. Alana waited and stayed and the fact that it was a foot save, was even better. That was fantastic and it was huge for her confidence and great for us,” said Paul.

American Heritage wouldn’t score again and the final score would stand at 3-0.

“When some teams come and play us, they back it in and don’t go for the win. They come for a tie. With their whole team back there, it was hard for us to score. It was a great game,” said American Heritage head coach Cindy Marcial.

“You’re not going to judge whether you beat them or not as your only success. You’re going to judge how well you played against basically a small college. We’ve been mercy ruled so many times by them and the idea that the final score is only 3-0 is great. This was a great learning experience against one of the best teams in the state,” said Paul.

Over Christmas break, the boys’ team travels to Orlando to play in the Hickory Point Invitational. The tournament showcases some of the best teams in the nation, including former number 5 in the nation Choctawhatchee High School. As for the Lady Conchs, they open up the New Year playing Keys’ rival Marathon on the 6th, then play Ransom Everglades on the 9th. Both games will be played at home.

As for now, both teams leave Heritage Field with an even stronger sense of confidence and pride heading towards the state playoffs.