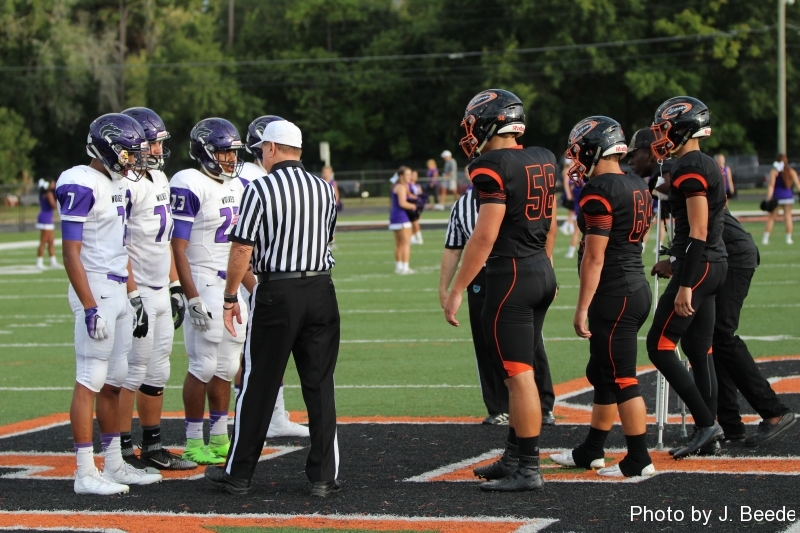 Oviedo, FL — Heading into the game, very few people had the Oviedo Lions beating the Timber Creek Wolves. And very few people had wide receiver Michael Lopez on their radar. And who expected a sophomore starter throwing 2 touchdowns in his first varsity start? One thing is for sure, Lopez believed in his team and proved it on the field by catching the go-ahead game-winning touchdown with less than two minutes left in the game leading the Lions to a 20-19 victory over the Wolves in what was once again an epic showdown. 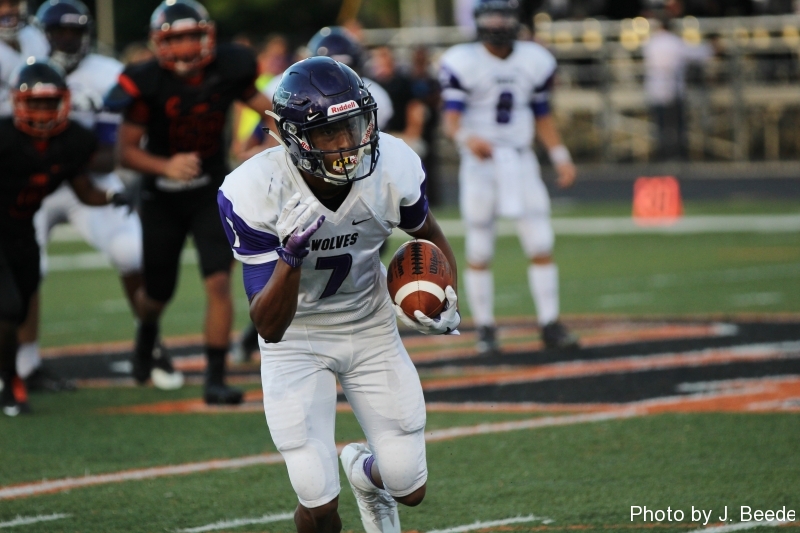 THE INFO: The Wolves struck first charging down the field behind three big rushes from senior back Jackson Saffold giving Timber Creek an early 7-0 lead. The Lions took over on offense and produced a successful drive of their own which ended in a rushing touchdown by sophomore Jake Harris. Timber Creek jumped back on offense and Saffold continued to run. What appeared to be a 15 yard rush inside the five-yard line turned into the worst possible situation for the Wolves. The play was called back for holding and Saffold was still on the ground grimacing in pain. Unfortunately, the 6’0 senior running back would be unable to return to the game. At the end of the first quarter, the game was tied at seven.

After the penalty, Oviedo forced a stop and went back to work on offense.

The Lions quarterback Morgan Mitchell let the ball fly with 4:53 left in the first half and the ball found its way into the hands of Tolbert Alexander, allowing Oviedo to take control of the game, going up 14-7 after the 52-yard touchdown pass to Alexander.

Timber Creek stepped back on the field and said, “anything you can do, we can do better” as Maryland commit Mj Jarrell scored on the first play which happened to be an 80-yard touchdown pass with 3:31 left in the half. The Wolves were unable to score the two point conversion so Oviedo led 14-13 at halftime. 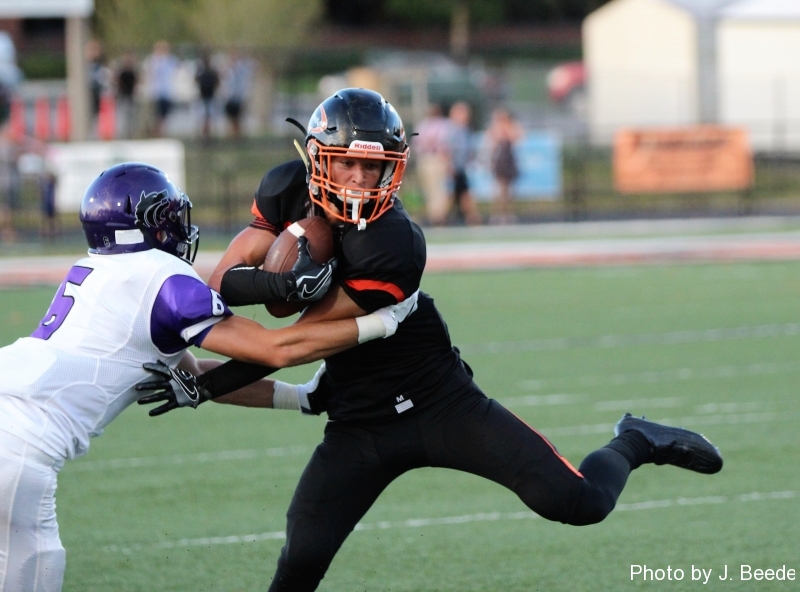 In the second half, the Lions had an early opportunity to score but the score was called back after a false start by the offense. Forced to punt, Oviedo still led by one with less than four minutes in the third quarter. Starting off the 4th quarter, Timber Creek was faced with a tough decision to either kick the field goal or go for it on fourth down. The Wolves felt confident and it worked. Peter Hayes-Patrick ran up the gut of the Lions’ defense and scored giving Timber Creek a 19-14 lead at the 10-minute mark of the 4th quarter.

Minutes later, the Lions were in crunch time looking to score. Morgan Mitchell hooked up with tight end Connor Denny, still on their 31-yard line with less than four minutes in the game down five. The very next play, Mitchell was picked off by Caleb Blake. The Lions’ defense held their own forcing a Timber Creek three and out giving the sophomore one more chance to win the game with 2:35 left in the game. 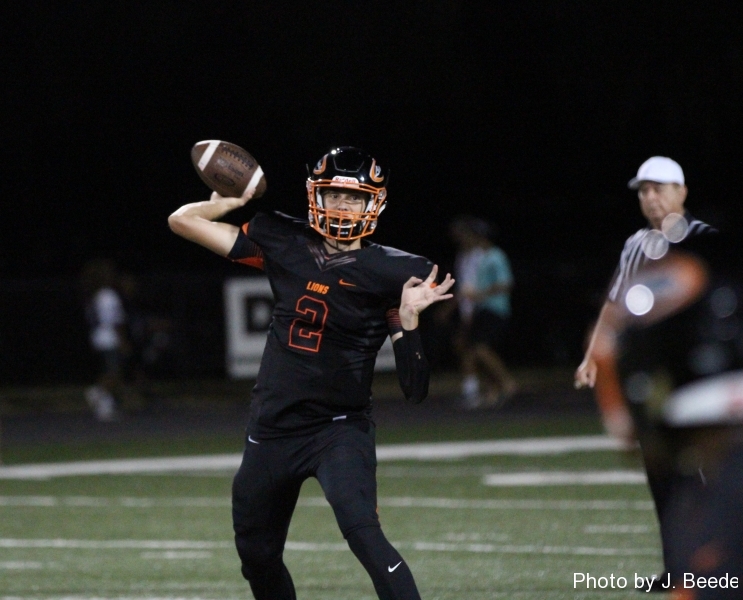 KEY PLAY OF THE GAME: Driving the ball in hurry-up offense, Mitchell threw a the ball thirty yards to senior wide receiver Tolbert Alexander, setting up the Lions on the 33-yard line of Timber Creek. The next play, Mitchell pulled the trigger from the back-field and sent one flying to wide receiver Michael Lopez. It felt as if the ball had been in the air for hours. Lopez went up for the ball surrounded by Timber Creek defenders. The crowd erupted and Lopez appeared to catch it. Fighting for control of the ball, the refs had to make a game changing call: was it a catch? The referees joined together and after moments of confusion of what just happened the ref put his two hands up signaling the touchdown. Thanks to the late heroics of Mitchell and a fantastic snag by Michael Lopez, the Oviedo Lions start off the 2016 season (1-0).

STAR OF THE GAME: Nick Sala, the Oviedo senior cornerback, was the true star of the game. Of course, Mitchell and Lopez connected for the game-winning touchdown, but Sala had two critical interceptions in the game, including the one that iced the victory. After the shocking play that put the Lions up one with less than a minute to play, Timber Creek didn’t give up just yet. The Wolves did as much as they could to score one last time. Timber Creek faced fourth down with 1:15 left in the game and threw a pass into the red zone to get within field goal range. Sala went up with the Timber Creek wide receiver and snatched the ball for his second interception of the game and yet another defensive stop for the Lions. Mitchell jumped back on offense, kneed the ball and the rest was history. 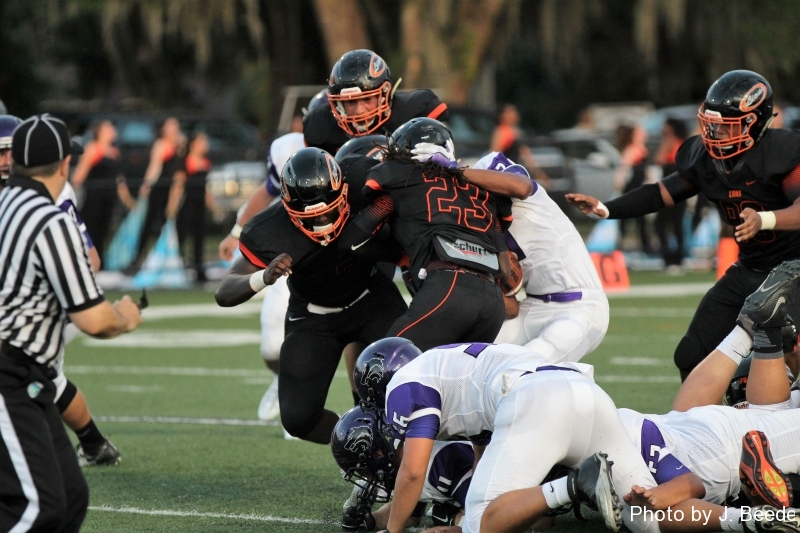 DID YOU KNOW: Three out of the last four seasons, each time these two teams face-off, the winner has narrowly escaped by one point. Last season, the Wolves in double overtime, 38-37 over the Lions. Although this one didn’t go to overtime let alone double OT, both Timber Creek and Oviedo showed us once again why this game will always be a nail biter until the final whistle.

Morgan Mitchell, the star quarterback for Oviedo, played little to no varsity football last season. Either he took great game notes or was playing serious Madden on the sidelines last year because tonight, he did not play like a sophomore. Mitchell appeared to be quick on his feet and confident in the pocket as he threw two touchdowns and 209 yards in his first varsity start. Despite two interceptions, the 6’6 sophomore defied the odds and sent a wake-up call to the Timber Creek defense and the fans watching.

QUOTABLE: “Everyone thought we were going to lose. There was no way we were going to beat Timber Creek they said. I saw the ball in the air and pulled it down. I’m not gonna lie. He took it from me, but I came down with it and I was praying for it. I can’t even explain it”, said Michael Lopez on the game-winning touchdown catch. 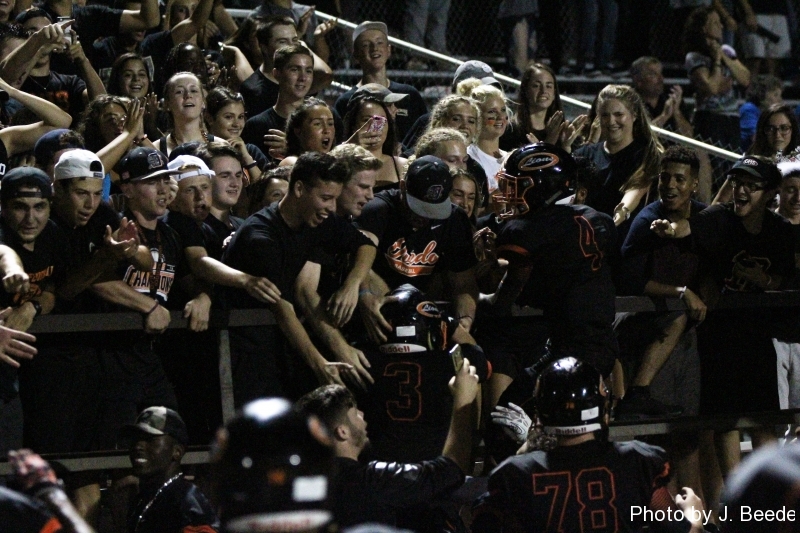 WHAT’S NEXT: The Oviedo Lions (1-0) travel next week to face Osceola, a team that crushed Bartow by two touchdowns, 21-7 in their season opener. As the for the Timber Creek Wolves (0-1), the team hosts Oak Ridge, who lost 52-6 against Jones in Week 1.

Both teams fought  hard in what became yet another Florida high school classic between Oviedo and Timber. However, Oviedo escaped winning by one proving that they are a dangerous team to face. Whether or not Lopez made a clean catch on the miracle game-winning touchdown, the Lions are a team to watch from here on out. The best part? That was only the first game of the year. Welcome back football, we’ve missed you.

123►
This entry was posted in High School Football.
BeedeFoto.com