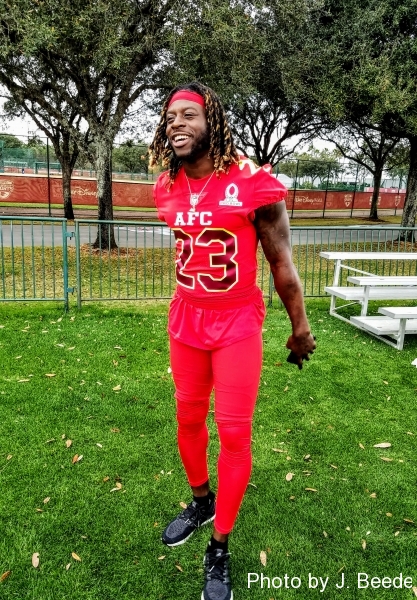 Miami Dolphins running back Jay Ajayi believes his best is yet to come heading into year three of his professional football career. After a breakout season, in which he rushed for over 1,200 yards and eight touchdowns, Ajayi is excited about next season and wants to help create a winning culture in South Florida.

“I think it starts with the foundation and the culture we kind of instilled this past season. I think we were able to bring in a new mentality, a new culture and I think it’s about this offseason, not losing that feeling even though everyone’s away doing their own thing,” said Ajayi after the final practice for the 2017 Pro Bowl.

The Dolphins reached the playoffs for the first time since the 2008 season after finishing the regular season (10-6), 2nd in the AFC East, clinching a wild card birth. The rematch with the Pittsburgh Steelers was set. In week six, Miami defeated the Steelers 30-15, but had to travel up north for the wildcard game. The Steelers won 30-12, sending the Dolphins back to Miami.

“Obviously at that moment we were disappointed because we lost the game and so it’s just about, you know, understanding that you need to get back to this point and back in the playoffs and make sure we do what we need to do to advance,” said Ajayi.

For Ajayi, it wasn’t until that week six matchup against the Steelers that he truly shined. The Miami running back rushed for 204 yards and two touchdowns. Then the week after that, he had another big day against the Buffalo Bills racking up 214 yards on the ground and one touchdown. His nickname is the “Jay Train” and he certainly continued to zoom past opponents throughout the rest of the season. And that’s what is most impressive to the organization about Ajayi, his consistency to work hard and to have success on the field. 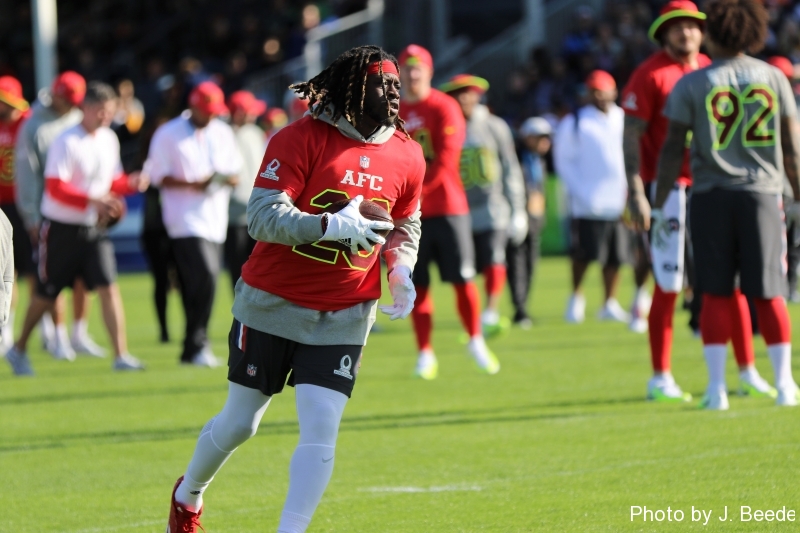 “I definitely am grateful that they believe in me, that they believe
my best years are still to come and I believe that as well. You know, I’m comforted that I was still able to have a great year this season, but you know some games I didn’t even really play in as much while we were still figuring our identity out,” said Ajayi.

That’s the craziest part of this whole story. After losing Lamar Miller to free agency, the Dolphins were set on star running back Arian Foster. Ajayi did not play or even travel with the team when they played against the Seattle Seahawks on the road in week one. As fans saw back in August, he did not impress in the preseason but had a role on the team solely because of Foster’s age and injury history. In 2015, he had a quiet rookie season.

In the week two loss to the New England Patriots, Foster, age 30, had to deal with more soft-tissue injuries. Still, Ajayi wasn’t highly productive on the field scoring only two touchdowns in four games and 117 rushing yards over that span.

As I mentioned above, his two first big weeks came against the Steelers and the Bills as Ajayi became just the fourth player in Super Bowl era to have back-to-back 200 rushing games. Foster returned in week six but wasn’t the same player. Then on October 24th, Arian Foster retired. Ajayi’s emergence helped the Dolphins and the Jay Train continued to roll on.

“I missed out on some things here and there this year, where this (coming) season I’m excited to just hit it from the jump. Year three, I definitely feel like I need to take a jump, you know I’m always trying to improve my game so that’s me. I’m always trying to get better and improve,” said Ajayi.

As Ajayi took over as the main running back once Foster retired, not only did his game improve but his relationship with Dolphins head coach Adam Gase improved as well. According to Ajayi, both he and coach Gase have the “competitive fire inside”.

“It was us just having that competitive fire inside both of us, that’s all we want to do is win. All we want to do is see the team succeed. Once he kind of saw that through my play, just let my play showcase how I want to help the team, we were just able to build off of that. Being productive as well, that helped,” said Ajayi.

Of course, as coach Gase saw the potential and productivity out of Ajayi, he started to play more, and the team started to win games. After starting the season (1-4), the Dolphins finished off the season winning nine of their 11 final games, at one point winning six straight games.

“It was just about us, you know, coming together as a team and just understand what we wanted to accomplish,” said Ajayi. 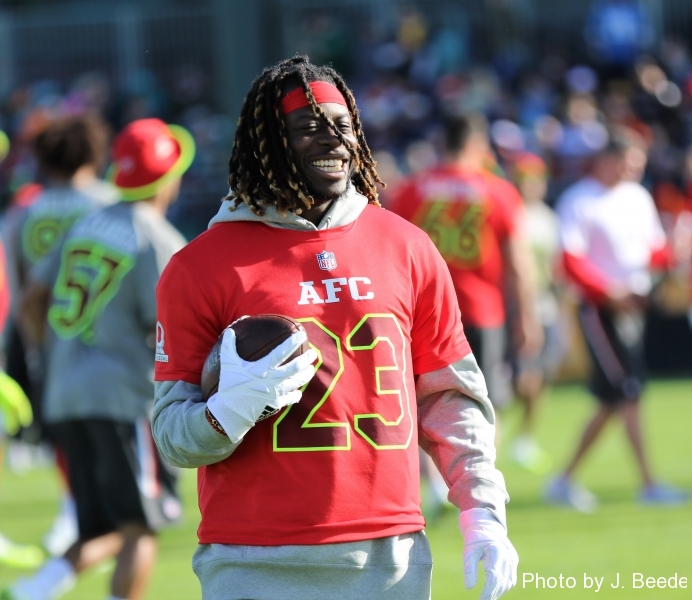 This season was his first time being voted in to represent the Miami Dolphins at the 2017 Pro Bowl in Orlando, Florida. However, there is more to the story than meets the eye.

Ajayi was born in London, England, and moved to Maryland when he was seven years old in 2000. After living in Maryland, he and his family moved to Texas, where he attended Frisco Liberty High School. As a senior, he rushed for over 2,000 yards and 35 touchdowns. In addition to football, Ajayi was a track star. He earned a varsity letter as a member of the team’s 4×400-meter (3:21.75), 4×200 m (1:29.44) and 4×100 m (42.86) district championship teams. The three-star recruit was redshirted as a true freshman at Boise State University.

“Doing that kind of stuff outside of football season is always great. It helped me with speed, helped me stayed conditioned, helped me stay in shape so doing those things helped me. I was a competitive guy and all I wanted to do was compete. College is like that as well, that you’re versatile, that you can do different things,” said Ajayi.

The first couple years in college were tough for Ajayi, which included a few off-the-field challenges. However his game improved in his junior year in 2014, and Ajayi became the first Boise State player to rush for 100+ yards in 10 games. He decided to forgo his senior season and enter the 2015 draft. He was drafted in the 5th round by the Miami Dolphins. Ajayi has proven himself since then for Miami.

Next season, the Dolphins are set to travel across the pond and face the New Orleans Saints and play at Wembley Stadium in London. As you might have expected, Ajayi is excited for this opportunity to play back home. As Super Bowl week approaches, Ajayi talked about the idea of London hosting a Super Bowl in the future. 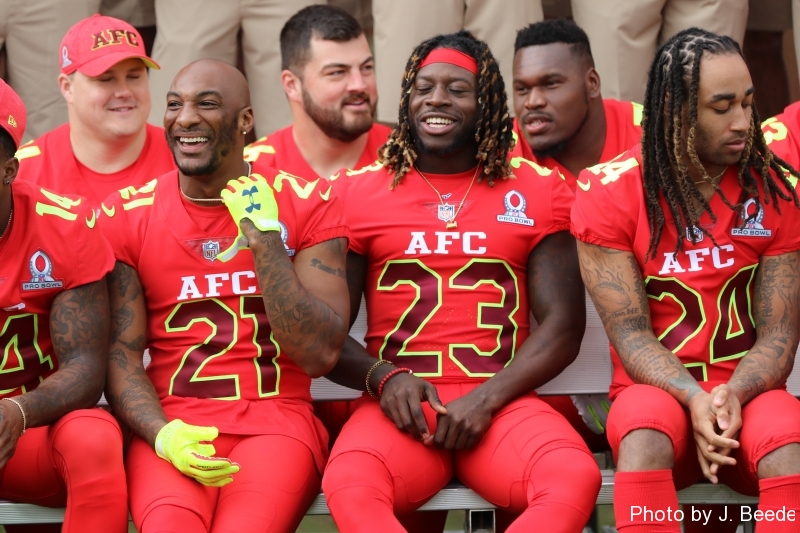 “It would be huge. The London games themselves sell out so to think of a Super Bowl in London it would be ridiculous. The fans are there to watch and it’ll probably be interesting for the actual teams in the Super Bowl of course, but that would be pretty cool,” said Ajayi.

The London-native has come a long way since moving to the United States and looks to continue to succeed in the league. Ajayi is proud of this past season and is excited for the future of the Miami Dolphins. For now, Jay Ajayi is grateful to be in Orlando representing his hometown London and the city of Miami. 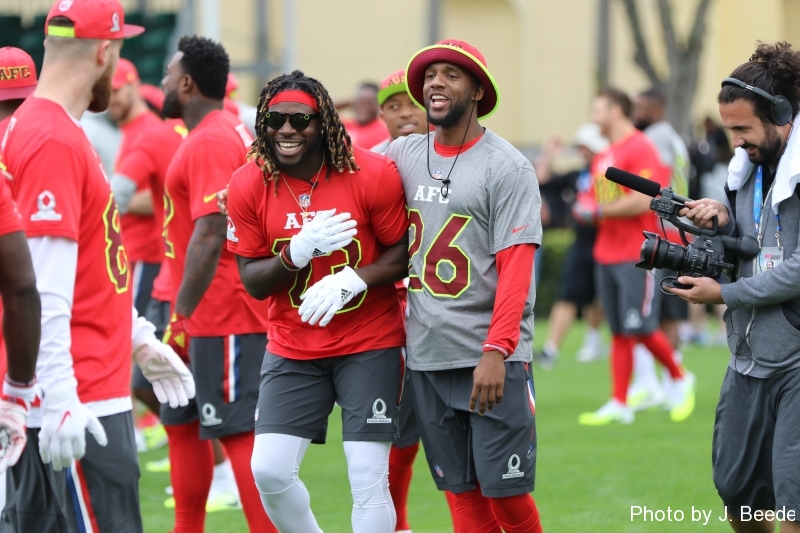 “It was just up the road, easy trip and I am definitely grateful to be here right now. It’s been cool to see a bunch of Dolphins’ fans out here just showing support.”

“We’re all having fun up here,” said Ajayi.

This entry was posted in Football, NFL Pro Bowl.
BeedeFoto.com