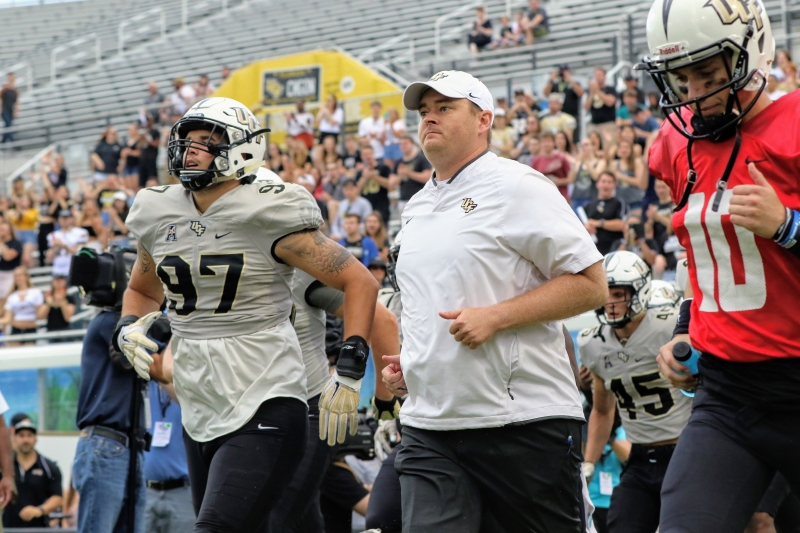 New head coach Josh Heupel and his staff ran out onto the field for the first time as the Knights faced each other in their annual spring football game Saturday evening. In front of an announced crowd of over 22,000 fans, quarterback McKenzie Milton led the way with 183 yards on 14/21 passing with two touchdowns.

The scoring was strange as the game was the offense vs the defense with alternating quarterbacks each drive, however, the final score was 17-14.

“I think we’re a little faster than last year,” Milton said after the game. Based on the pace of play in the spring game, the offense played at a higher tempo compared to last season. Although it was only a spring game, it’s evident that Heupel’s scheme in 2018 will be faster.

Even linebacker Nate Evans said after the game that this offense is “way faster than last year.”

“As soon as you turn around from making a play they are back up there getting a new call and lining up. It is way faster than last year for me personally. It’s good for us as a defense because it gives us a chance to work on our stamina and not get as tired as fast,” said Evans.

Although there was a running clock in the second half, when all of the starters were in the game, the offense was moving. Heupel’s no-huddle offense moved quickly down the field and according to Milton the offense will be more vertical and will take more shots down the field.

“Offensively, our one group stubbed their toe a couple (times), but executed some things really well,” Heupel said. “I thought our playmakers, with space when they got the ball in their hands, did a good job of creating some space to make plays.”

Heupel said after the game that today was wide receiver Tristan Payton’s best day of the entire spring.

One of the top plays of the game came on a 43-yard touchdown pass from Milton to Payton. After playing on defense for most of last season, Payton returns to the offensive side of the ball and looked sharp in the spring game. Payton was targeted only two times for 45 total yards but his touchdown catch was the most exciting catch of the game.

Later in the first half, showing a little trickery, Milton pitched the ball back to Payton who threw the ball downfield to wide receiver Tre Nixon. Despite it not being caught, the pass was not that bad. The flea flicker was something we had rarely seen under Frost’s system so don’t be surprised if we see some trick plays in the fall.

Seeing Payton go up and grab a canon like that from Milton was a good sign of things to come from for this offense.

3. The National Championship is no gimmick.

Despite all of the talk from the players and the new staff that they are ready to move on from the 2017 undefeated season, one thing is clear: UCF’s claim to a national championship will not be left in the dark.

“That was cool,” senior linebacker Pat Jasinski said. “I mean, obviously that’s something you can be proud of. But like McKenzie (Milton) said, it’s in the past now and we’re really looking forward to just trying to put some more (numbers) on that Roth Tower.”

After the game, each player received a national championship ring.

“Just reflecting on that and seeing some guys on the sideline, Tre’Quan Smith, Shaquem Griffin, Tony Guerad — seeing some guys that have been through that with us,” Milton said. “It’s kind of cool to put that past us, too, by playing football, by playing the spring game. This is going to be the 2018 Knights, and we want to do something similar, and I think we have a great chance to do that.”

4. Plenty of options for Milton

Sophomore running back Greg McCrae rushed for a pair of touchdowns, finishing with 57 yards on 15 carries. McCrae was all over the field as he ran the ball 15 times. Freshman Bentavious Thompson rushed 14 times for a game-high 79 yards. Sophomore Otis Anderson was used as running back and wide receiver. Anderson caught in a game-high five receptions, including a touchdown, while also rushing for 19 yards on three carries.

It’s clear quarterback McKenzie Milton has help offensively and the spring game showed just how deep UCF is at the running back and wide receiver positions.

“I just wanted to go out there and perform,” Milton said after the game. “I wanted us to be consistent, sustain some long drives and put some points on the board. I felt like we did that, and we had about two or three series where we put together solid drives.”