By jasonbeede@gmail.com | Published
May
21
2016
Spread the word 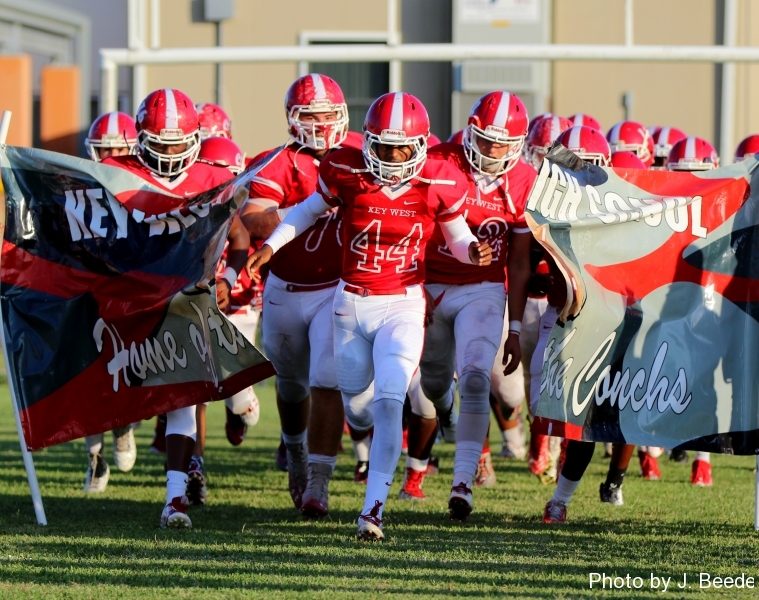 For the first time in three years, Mekhi Sargent was not in the backfield for the Key West High School football team and head coach Johnny Hughes. However behind a two touchdown performance from sophomore Jesse Garcia, the Conchs were just fine against a lackluster defense of the Marathon Dolphins. Key West dominated keeping Marathon out of the red zone the entire game winning 27-3 in the spring game on Friday night at Tommy Roberts Memorial Stadium. 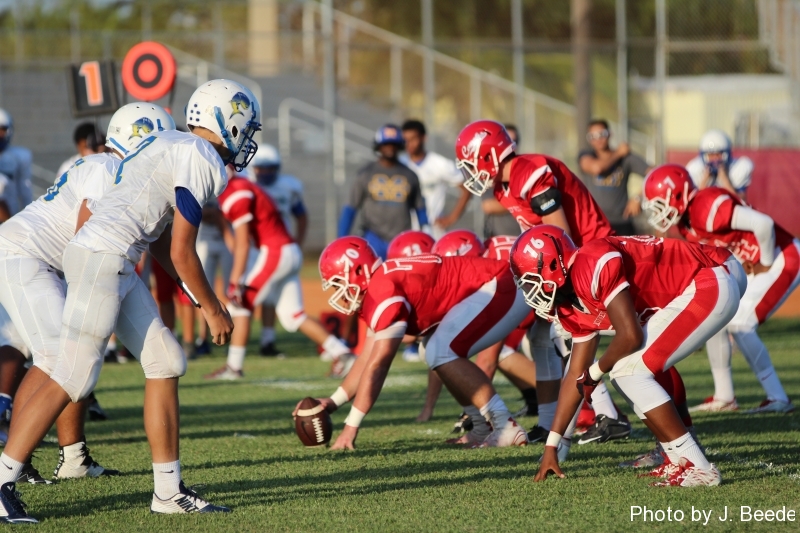 The Conchs offense and defense were full of new faces as Hughes pointed out after the game. Despite new players coming out looking for a spot to fill, quarterbacks Michael Cleaver and Carson Hughes stepped back on the field along with wide receiver Alvin Howard. Cleaver earned the starting job for the spring game, but both quarterbacks made an impact on the game. 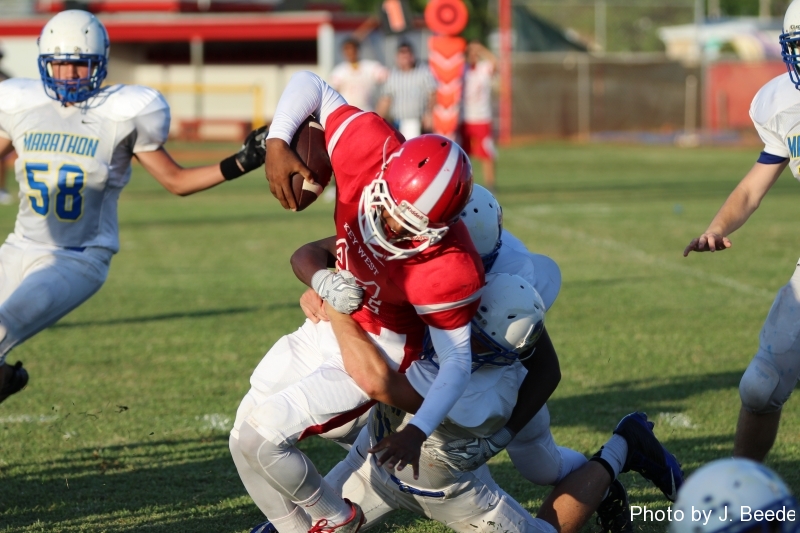 Running the traditional triple option offense as usual, the Conchs picked up 343 total offensive yards, a huge chunk coming from Garcia. The sophomore rushed for 118 yards and two touchdowns including a 23 yard rushing touchdown on the first drive of the game. Alvin Howard added 81 receiving yards and an additional 11 rushing yards.

“I expect that from him (Jesse Garcia). We knew that he was something special when he touched the ball last year, he had three carries and two touchdowns for us. He runs hard and he’s a 110 percent guy all the time,” said Hughes when asked about Garcia’s breakout performance.

After Garcia’s first touchdown that capped off an 80-yard six-play drive for Key West, the Dolphins responded with a big drive of their own. Going 53 yards in 11 plays, Marathon was able to get on the scoreboard after an impressive 45 yard field goal from Sammy Zambrano. At the end of the first quarter, Key West led 7-3. 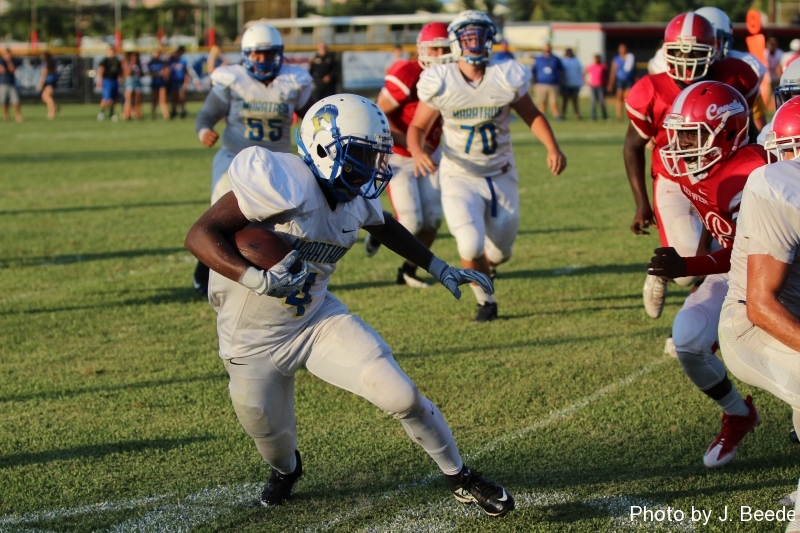 The quality of defense increased in the second quarter as both teams forced a three-and-out. Looking to reach the red zone, the Dolphins were threatening deep passes. Key West’s Payton Hummel picked off one of the passes and the Conchs bounced back on offense with 43 seconds left in the half.

Key West quarterback Michael Cleaver connected with Howard on back-to-back screen passes. The first being harmless, the second being a 64 yard touchdown. Howard ran down the line and cut inside finding a hole in the defense and giving the Conchs a 14-3 lead heading into halftime. 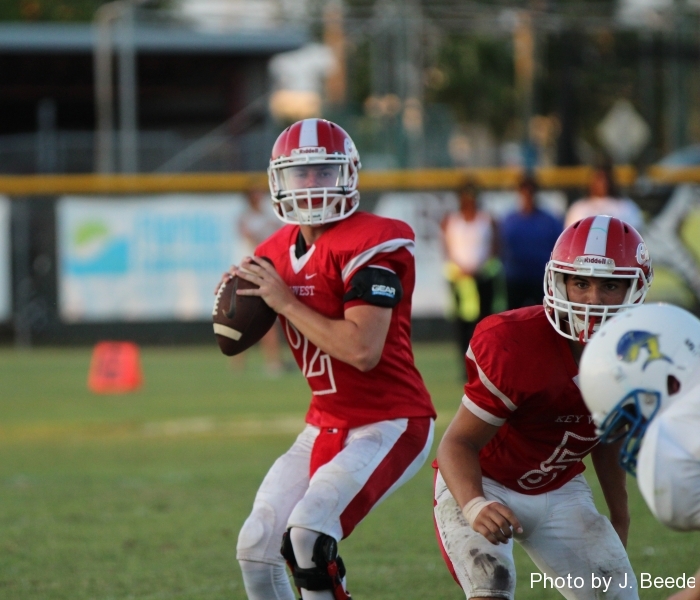 As more inexperienced players stepped in for the starters, the quality of play decreased and it was obvious. Both teams only combined for 51 yards in the third quarter including a fumble by Key West.

“We’ve got film on everybody now so we can go in the classroom and show them what they did wrong. We can show each player what happened and how we want things to get done. Everybody can learn from this and that’s a good thing,” said Hughes.

Carson Hughes took over as quarterback for the Conchs in the fourth quarter and opened up with a four-play drive. Hughes threw for 36 yards on the drive. Garcia exploded again securing the victory with a 38 yard running touchdown. 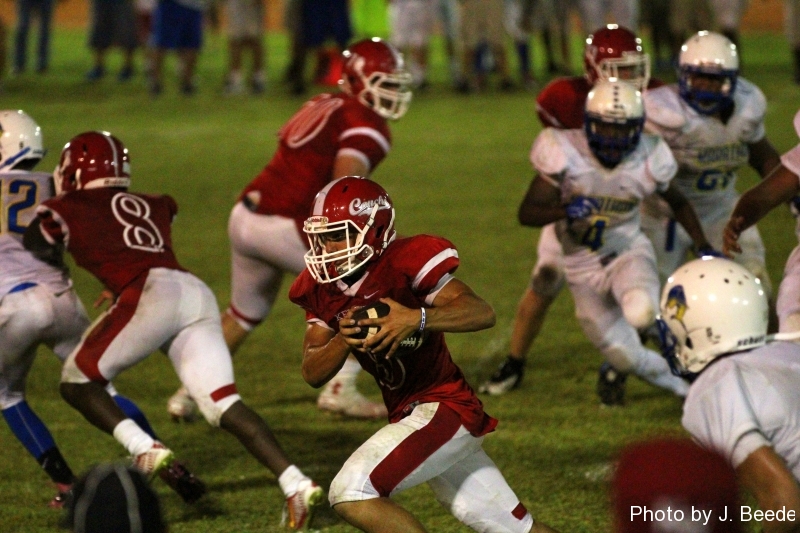 In the final minute of the game, Delarus drove in a touchdown of his own with a 56 yard rush. Marathon was unable to score after their early field goal turning the ball over two times in the game.

“We’ve got to get stronger. I thought Marathon handled us upfront so we need to build our strength in the weight room. We need to fix some things here and there. For the most part, we just need to get bigger and stronger. We need to watch our film, hit the weight room and adjust. Overall both sides of the ball played very well,” said Hughes.

This entry was posted in Key West HS Football.
BeedeFoto.com