In a dramatic game at Bobby Menendez  Gym on Saturday night, the Key West Conchs upset the Gulliver Prep Raiders with a final score of 66-58. Behind an electric crowd and 31 points by freshman Lamont Woods, Key West picked up a huge District win.

“It was definitely a huge win for us. We haven’t beaten Gulliver in years. This win along with Westminster Christian losing last night put us in first place in our District,” said head coach Eric Brown.

Heading into the fourth quarter, the intensity had increased and Key West was only leading by one point, 39-38 over the Raiders. Key West only shot 38 percent from the field, but the difference was free throw shooting. The Conchs shot an impressive 72 percent from the line hitting 21/29 free throws. Woods alone shot 13/15 late in the game. Page was a perfect 4-4 from the free throw line securing the win for Key West.

“It was Odelton’s free throws that sealed the deal. We’ve always practiced free throughout the season and I guess we were on and make some key ones to get it done,” said Brown.

Both teams had their largest quarter in the fourth. However, Key West scored 27 in the fourth, while Gulliver Prep only 20. Thanks to Page’s clutch free throw shooting in the final minutes, the Conchs were able to upset Gulliver Prep 66-58.

Because of the win, the boys team is now first in the Class 4A District 16 as shown below: 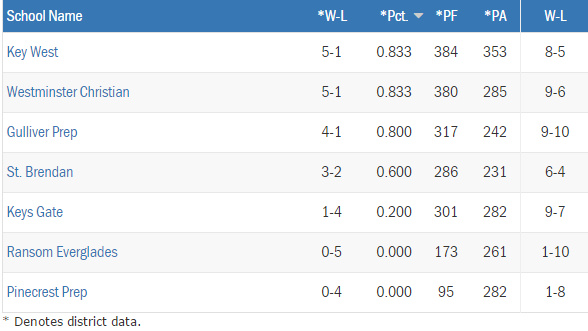 “Being in first place is huge because come District tournament time we would have a first round bye which would give us more time to practice and prepare for whoever our opponent may be,” said Brown.

Key West (8-5) overall and (5-1) in District play has five games remaining before the post season ends. On January 14th, the team hosts Keys rival Coral Shores and the very next day they travel to Marathon.  On the 25th, the team travels to Coral Shores and ends the regular season at home for its final regular season games against Greater Miami Academy on the 27th and Homestead on the 30th.

After cracking into the top ten in the FHSAA 4A rankings earlier this season, the Conchs are currently ranked 22nd in the 4A according to Max Preps. No matter the rankings, two things are certain. South Florida basketball is heating up as the regular season comes to a close and we head into the postseason. If Key West wants to make a postseason run and return to Regionals for the first time in three years, they will have to continue competing at this high level of play.

“We have a very young talented team. All I ask is that our team goes out and give 100 percent every time we play. I would love to go that far (regionals) and if not further but at this point we will continue to take one game at a time,” said Brown.